Tom Bowen was born in Australia on April 18, 1916.In the 1950’s Tom began his practice treating workmates and others that had heard of his reputation, in the front room of a friend’s home in the evenings after work. Word of his healing hands spread throughout the region and soon he could not accommodate the number of people wanting his treatment in this part-time manner so he opened a full time practice.

Not being formally trained in any bodywork modality, Tom, through his own study and practice, developed what we now call the Bowen Technique. With his amazing skills of assessment, he was able to alleviate many people’s problems with very few, relatively gentle, soft tissue manipulations. 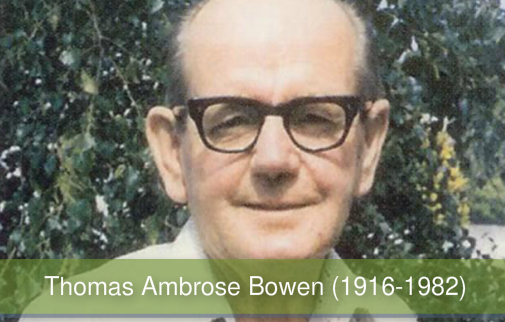 Tom was highly selective of those who wanted to watch him work and learn his technique. Only six people worked with Tom over his years of practice. One of these was Ossie Rentsch from Hamilton Victoria. After many months of following Tom and watching him treat his many patients, Ossie began to understand the technique. Under Tom’s close supervision and his assistance Ossie documented the work(a painstaking exercise as there were no charts or explanations available)and this stands today as an original record of Tom’s work.

What eventuated was a carefully documented and authenticated record of this amazing technique. The technique could be now taught and became what we know today as Bowtech®, the Original Bowen Technique.

In 1976, Ossie and his wife, Elaine, began utilizing Mr. Bowen’s methods in their clinic in Hamilton, Victoria.

Honouring Mr. Bowen’s request to teach the work after his death, Ossie and Elaine named it The Bowen Technique and held their first seminar in Perth, Australia in 1986. By1990. Ossie and Elaine were teaching full time throughout Australia. Dedicated to preserving the technique and ensuring it was taught in its original form, they founded the Bowen Therapy Academy of Australia in 1987, eventually naming the technique Bowtech-The Bowen Technique. Since then, Ossie and Elaine have introduced Bowtech to many countries, honouring the promise Ossie made to Mr. Bowen on his deathbed, to spread his work throughout the world.They are now supported in this teaching by a large faculty of dedicated instructors who are accredited by, and registered with, the Academy.

Because this technique is so effective, it has been widely embraced by a broad spectrum of people. Health professionals are impressed by the effectiveness of the Bowen technique and the diversity of problems addressed by it.

Today over 26,000 people have completed basic Bowtech®, the Bowen Technique course, in thirty countries and in six languages. Worldwide, there are now 90 instructors teaching Bowtech®.